We both started new jobs in the same week. Totally different schedule, and we were still getting use to Tage being home during the day. Guess we decided things weren't crazy enough.

I have a certain way I would run the home if I were home and I'm finding it a daily struggle to resist criticizing what's not done. Even when my amazing husband does every stitch of laundry and has the homework and reading done every night, I still find myself overwhelmed by the many tiny things that are undone. I need to relax. My kids are happy and healthy. My husband enjoys his new job. I love my job. We both have jobs and that's more than a lot of others have now. I need to be grateful, and okay that my house isn't going to be immaculate, and homemade meals aren't going to be eloquently presented on the dinner table every night.

As I settle into a new career, there aren't set hours and it's much different than a job I clocked in and clocked out of and came home. My job now doesn't just stop at 5pm, but I can understand how it's difficult to make the transition when we are use to me simply clocking out and getting home at the same time everyday. For me, wrapping up end of day emails, tying up a few lose ended conversations, making sure everyone I manage is okay for the rest of the day doesn't automatically end at 5pm everyday.

Sometimes we are both just floundering in getting comfortable, having the faith that we'll make it through. We both feel strongly that we are doing what's best for our family right now. Just because it's right doesn't mean it's easy. (Eating healthy is right, but not always easy or comfortable).

Probably a big dose of RELAX for the both of us, followed by a tall glass of GRATITUDE could come in handy just about now.

My life is amazing, I am so greatly blessed with a wonderful husband, with incredible in-laws in my life that have embraced me into their family and have loved my children without hesitation. My husband's ex-wife is wonderful and I'm blessed to call her my friend. My children have a great new sibling, and live in a safe, clean, caring neighborhood. My husband builds forts, visits my Mom, hangs out with the kids, helps with homework, is involved and aware of all of our individual lives, and he makes amazing dinners! My life is better than I had imagined, yet completely different than I could've ever believed it would be.

There are still moments, much fewer and far between than before, but still moments....where it all feels pretend. I find myself waiting for it to all "POOF" and disappear. I find myself hesitant to put my 100% FAITH in this life.  I trust my husband, I trust the Lord. It's those moments of doubt that freak me out.

I wonder if there are moments in everyone's life where it just doesn't feel like "Real Life".

What is "Real Life" anyway?! Anything and everything we do is real, it's not like we are living in the Matrix. Even when bad things happen, even if people come in and out of our lives, it's all REAL! It all adds up to MY life. It all contributes to who I am.

As Tage and I venture into a new phase, which seems to be the nature of our life...I find myself taking yet, another leap of Faith that makes this life even more concrete, even more tangible, more reliable, more permanent, more REAL!

So, here we go...2 new jobs in the same week. Possibility of a new home, holidays around the corner....
So glad I have a wonderful husband to cling to through the craziness of REAL life! 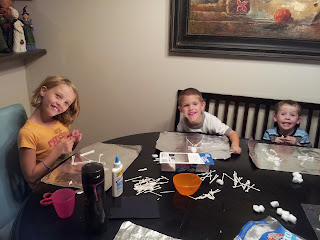 If you had a meeting at work that was to be the responsibility of the President, how would that go...?

If a VP asked a president, "How would you like to conduct the meeting?" and the Presidents response was "I don't know." Then what?

I like being in charge. I like running things my way with my ideas. Yet, just like any organization needs specific responsibilities assigned to specific individuals, so does a family. And when people start taking over other peoples assignments it leads to disorganization.

Family Home Evening is our "weekly meeting" for our organization. Tage is "in charge" of the meeting. Of course I want it to go a certain way. But, this is an area that I see an opportunity to gauge how I'm doing in allowing him to take pride in guiding our family, and my ability to support him. So instead of me saying, "Hey everyone we are having FHE! And then asking someone to give the prayer, and having everything already planned...I ask Tage, when will we be having FHE tonight? Anything I can do to help?  I'm very far from being good at this.


As a wife it's easy to fall into "doing it all". But, I feel that it's part of our responsibility to honor our husband by encouraging and reminding him of the responsibilities that are a privilege as the "head of the house."

Just as letting kids take responsibility for their own chores gives them a place in the home. It gives them confidence, it let's them know that they are a part of this family. The same goes for each of us, even the parents. We all need a place. We all need to allow each other to have a place. We need to hold each other to that expectation so that our family functions the best it can. Let your husband take pride in his responsibilities, and take pride in yours.

Work together to create a great organization just as two business partners would.
Posted by StayStanding at 10:00 AM No comments:

But I'm so Comfy!

"Comfortable", and "Good Enough" have never been my thing. I've always ran around crazy with my head chopped off trying to do as much as possible. Yet, over the past year I have found comfort and good enough in my job. It has provided stability and peace.

Just as I wish I could keep my kids so close to me all day to make sure they are okay, I still want them to grow up and learn all the lessons that will create the best people they can be. Unfortunately, we don't become better by never taking a chance. We can't progress without leaps of faith. We can't learn necessary lessons without messing up.

So, here I go taking a leap, hoping I don't fall flat on my face. Yet, knowing that even if I do, it will be better than having just sat on the couch all day. I start my new job next week. I'm THRILLED!

Who knows what can happen when all possibilities for growth now exist!

Posted by StayStanding at 7:10 AM No comments:

After a marriage of 9 years that ended in divorce, I'm now building a whole new life. Going from stay-at-home Mom to working full-time, and now my husband is a NEW stay-at-home Dad. May our juggling act filled with kids, work, home, ex's, job loss, and whatever may come, give you hope for your crazy life.